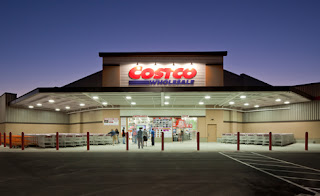 I recently worked a demo booth at my local Costco for two weeks. For reasons.

It wasn't on the first draft of my list of Things to Do This Summer; but neither was swim with an alligator, lip sync Boogie Woogie Bugle Boy or have an ongoing inner dialogue about the pros and cons of breaking up with Facebook – yet I managed to fit all of these things into this season! I guess I was just feeling productive.


I've worked trade shows numerous times … but this was different. This was Costco. Here are some highlights of two-weeks worth of observations.

If you stand in Costco long enough, the entire world walks by.

98% of that world already owns a Bosch Mixer.

80% of those who own a Bosch Mixer will yell at you, “I love my Bosch!” Most likely in an attempt to stop you from trying to sell them one.

We live among people who will eat Costco pizza at 10:30 AM.

There are a lot of people at Costco not dressing their truth. (Extra points if you get this reference.)

It takes three days of eating samples of pot stickers before you get sick of them.

You can eat endless samples of Brazilian cheese bread, grass-fed beef, and Belgium waffles with Nutella and never get sick of them.

The quickest way to reduce people to animalistic, post-apocalyptic behavior is to offer free samples.

People offering samples don't care how many you eat, from a supply point of view. But they will judge you for the sheer amount you consume. They quietly judge you with their eyes. And sometimes not as quietly, with their words. 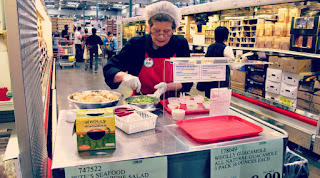 If you're working a booth, and you don't offer samples, you're a leper and you should be ashamed of yourself.

A genuine smile and “hello” from somebody passing by will absolutely make your day. You will have to exercise the greatest level of restraint to not leave your booth and hug that person and ask them if they'd like to chat for a few minutes over some grass-fed beef.

Standing for 11 hours in one spot is not natural. Your body will hurt. In weird places.

If you walk by a booth and the person working it doesn't at least engage you in eye contact, it is because they have just farted and don't want you to come anywhere near them. (They have to stand there for 11 hours! Cut them some slack! Let's see how YOU do after devouring 11 pot stickers!)

Get your heads out of your phones, guys. Our country's greatest form of entertainment is other people's children. Adorable babies abound in Utah County, yes. But my favorite was the four-year old who had clearly skipped nap time (since the Tuesday before) and, through tears of rage and screams of inhumanity, was using both hands to pick up every item in the cart and hurl it at the floor as fast as he could, while the parents made a bee-line for the front doors, suddenly losing interest in actually making any purchases. I don't know the back-story of what was happening here, but something tells me it's a tale as old as time.

Speaking of back-stories. I made one up for somebody. My first day on the job, a gentleman rolled his cart over and started asking me some genuine questions about the product I was selling. We talked for several minutes, and I observed the number of items already in his cart. He eventually wandered off. “Nice guy,” I thought to myself. About 10 min later he swung by again and let me know he'd talked to his girlfriend, and she wasn't interested in the product I had. Fine. About two hours later ... he came by again … I was intrigued. What in the world was this guy doing, loitering in a Costco for hours upon hours in the middle of a work week? And then it dawned on me.

I wondered if I should tell management about this shifty dude, late 40s, Lindsey Buckingham look-a-like, that's clearly looking to move some real merchandise from this place.

Then, several hours later … he came by again. This time, with completely different things in his cart. Like, he had put stuff back (or stolen it) and now had a fresh load of goods in his cart. That's when it dawned on me.

He lost his wife and has become quite reclusive. He suffers from anxieties and the only thing he really does that makes him feel normal is venturing out to large, busy retail locations. He can strike up conversations with people and act like he is just your average citizen with a “to do” list. Then it occurs to me. My gosh. This man is me. If I were his age and I lost Katie, this is what I would become!!! My heart broke for this guy. I wanted to invite him over for dinner.

Then the next morning … I saw him again. And he had a Costco name badge on. And I realized he was shopper security. And then I was embarrassed. So I decided as long as I was embarrassed, I might as well go binge on Belgium waffles with Nutella until somebody shoos me away.

Aside from people I didn't know, I also bumped into a crazy amount of people I did know. Well over 100.

I saw a girl I dated my freshman year in college, 1989. We laughed, played “do you remember the time,” and realized we both had 16-year olds that should go out sometime. (Because, you guys, 16-year olds love nothing more than for their parents to get involved in their love life.)

I saw the parents of a girl I dated in 1993. The mom hugged me. She was always so kind.

A guy I became friends with in the LDS Missionary Training Center who I hadn't seen since 1990.
Young adults I knew in Las Vegas who now live here and are getting married.
Missionaries I knew in Las Vegas who now live here but aren't getting married.
Good friends who would visit with me for long stretches of time and act super interested in my mixers.
People I used to work with.
People I used to perform improv with in college.
My good friend Matt? His mom.
An old LDS mission companion.
A guy I used to play racquetball with in Las Vegas.
Neighbors, old friends, new friends.... you get the picture.

That was really my favorite part of the Costco experience. Seeing people from my past and present, and visiting with them. I know some really wonderful people.

Of course, visiting with them also made it so that I had to explain why I was working a booth at Costco. The real reason was boring and required a longer explanation than I cared to dive into. So I got pretty creative.

“I'm just filling in for a friend who's on his lunch break.”

“I recently bought the company and I'm interested in discovering public opinion on my own.”

“It's always been on my Bucket List to do this, and I know a guy.”

“I'm just doing some consulting and this is a weird part of the gig.”

“Why did you come over here? Didn't you notice I wouldn't make eye contact with you? No, I don't know what smells vaguely like pot stickers.”