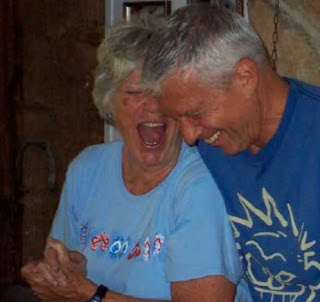 My dad has been gone a year today.

I have replayed in my mind, countless times, the moment I got the phone call from my mom. Her voice had a tremble, and her breathing was uneven. She had come home and found him on the floor. His heart had stopped. With impeccable health and physical and mental strength that defied aging, it was simply his time to go.

I’ve missed my dad. And it’s an ache that is hard to describe. I don’t just miss the 2019 version of my dad. I feel like I miss the entire 48 years I knew him.

My dad was a presence. You knew when he was in a room.

And yet I can tell you at least three specific times in the last year when I knew he was in the room. And not just that he was there, but where he was. I couldn’t see him. But I knew precisely where he was in that room. Each time. It is reassuring, it is comforting, and it’s a gift I wouldn’t dare ask for – because I don’t feel like I could reasonably expect such a thing. It’s this generous tender mercy.

April 2019 feels like a lifetime ago, because so much has changed in that year and my family doesn’t look the same. Lucy was baptized, Abbie went through the temple and got married, Josh joined our family, Garren came home from his mission in Brazil, Connor went through the temple and left on his mission to Washington, Roxanna had a distressing brain injury, Tanner’s voice is continually lower and his tallness is continually higher.

You naturally expect the emotion of certain “firsts” without your dad. His birthday, Father’s Day, Christmas, weddings, etc. With the expectations of those moments, you can somewhat prepare yourself. Not that they aren’t emotional, but you anticipate it and brace yourself.

It’s the moments that catch you off guard that really do a number on you.

When you come across someone – anyone – who knew your dad and they take a moment to tell you why they thought your dad was great. I was recently in the temple here in Provo and a man came up to me and asked, “Are you related to Ken Craig?” (I was named after my dad, so I had no idea if he meant my dad, if he had me confused with myself, or if he meant somebody else entirely.) I just stared at him, so he continued, “From California … he was a CPA.” “Yes, that’s my dad.” “I knew it. You look just like him.” This man had done some computer work for my dad back in the early 1980s. It caught me so off guard, it had an emotional impact on me that was different from missing him on a holiday.

My brother, Dehn, was in town one afternoon, for work. He texted and asked if I wanted to grab lunch before he left. Sitting across from each other at this quiet restaurant, we started talking about our kids. One of mine was heavy on my mind. It was something that I would have shared with my dad (and mom), but not too many other people. I felt vulnerable. But as I looked down at my plate, picking at my food, I started telling Dehn about it. When I looked up at him … I promise you, I was looking at my dad. It was Dehn, with my dad’s eyes. The softness and empathy. The concern, and also the confidence. Then Dehn started talking and he made this distinct movement that my dad always made. I could barely – barely – hold it together until I got out to my car.

Another time, I walked into a small post office to mail a package to my son in Washington, and playing over the sound system was Neil Diamond’s Hot August Night, his live recording from the Greek Theater in 1972. All my growing up years, it was Dad’s go-to album. My earliest memories have this album in the background. And it was this particular part of the album that you really just have to be a superfan to know. (It’s the very beginning, when the string orchestra is playing the prelude, before the drums kick in for Crunch Granola Suite. Do you know the part? If you do then you should know that you and I are instant best friends.) This is not an album that gets radio play, and it is certainly not a part of the album that gets radio play. It had no business being played over a speaker at a post office. I had to excuse myself from the premises.

And most recently, I came across this photo of my mom and dad laughing together. Do you see this? Can you feel it? No matter my age, no matter what else was going on – when I would see my parents laugh like this together, everything was right in the world. They were united and they were in love and they were joyful.

I hope my kids feel that when they see Katie and I laugh together. I hope that is part of the legacy I am leaving for my children and eventual grandchildren. I value this part of my dad’s legacy more than I would have thought.

I do feel like he is just around a corner, waiting for me. This is a temporary separation, and that offers more comfort than I know how to express. It is the thing that makes it all ok. It strikes me as poignant that today, this Saturday, is the one-year anniversary of his passing, and it falls on that “waiting day” between Good Friday and Easter. I am waiting to see my dad again – though I am grateful I don’t have to wait until then to feel him nearby. I love my Savior, Jesus Christ, and the peace that is always, always offered.

“We will all have our Fridays, but I testify in the name of the One who conquered death, Sunday will come.” – Elder Joseph B. Wirthlin.