The Stake Dance: A Metaphor for Life

Without permission, my daughter Abbie turned 14 last week. And I have no one to blame but myself, as it even happened on my watch, and I did absolutely nothing to stop it. In my defense, I was distracted by my life-changing AppleTV and being able to watch YouTube videos on my television! Ah, technology. I kind of fear you, sometimes.
The thing about being 14 in the LDS Church is that you now get to experience that rite of passage known as … The Stake Dance. And Abbie will be attending her first on Saturday. 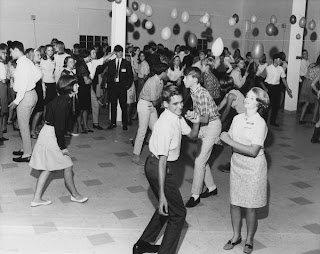 (For you non-LDS’ers, a standard congregation in the LDS Church is called a “ward.” Several wards combine to make up a “stake.” And once a month a dance is held in one of the ward buildings for all the youth, ages 14 to 18 in the entire stake. It’s a marvelous social opportunity for the young people in today’s world to come be together so they can bask in the overpowering odiferous combination of cologne and body order, circumvent actual conversations by texting each other from opposite ends of the gym, and at all costs – including death first – avoid any actual dancing.)
My gosh, what an emotional rollercoaster a Saturday night stake dance used to be for me. It was like experiencing puberty in a microwave. In one single evening you were terrified, elated, awkward, euphoric … you loved everyone, you hated everyone, wished you were younger, wished you were older, you had the sweats, and by night’s end…your voice had changed, and you were four inches taller.
The energy was palpable. Circles of friends assembled in assorted areas throughout the low-lit gym; half-dancing already, gossiping, hoping that “certain somebody” would be showing up that night, making lists of what songs you were going to request from Mr. DJ, and deciding what to do after the dance – going to Bob’s Big Boy for shakes, or going to toilet paper some poor soul’s house.
I remember my very first stake dance. My parents dropped me off outside the church, with a pep talk from my dad on how I should just grab the first girl I saw and use some pick-up line like, “Hey Sweetheart, teach me to dance.” Apparently my dad hadn’t been 14 in many, many years. And “sweetheart” must have been a warmer salutation at that time, or on that planet.
I walked into that gym alone, the youngest guy in the room, and immediately scanned the place for any sign of safety or reassurance. I suddenly found it in the face of Sherri Rosquist, a friend from my Sunday school class. I hadn’t been in the room two minutes and she came up to me.
“Hey, let’s dance!” she said, grabbing my hand and pulling me with her.
“I don’t know how,” I answered, as I walked out onto the floor with her. I really didn’t feel timid about having never publicly danced before, as much as I felt I should legitimately warn her that things could get unsightly, if not physically and socially precarious for the both of us.
“I’ll teach you,” she kindly responded, with a big smile and all the confidence in the world.
Bless you, Sherri Rosquist. Bless you for saving me from a night of discomfiture and an entire adolescence of shame. Bless you for knowing how to dance. Bless you for your forwardness. And bless you for calling me back to the dance floor when, during the humming part near the end of Modern English’s “I Melt with You,” I assumed the song was over and started to exit from said dance floor.
As the song finally did end, I thanked Sherri and began walking away when a tall brunette stepped right in front of me and blocked my exit.
“Wanna dance?!” she beamed.
Oh, hold me. It was the spectacular Danielle Martin! She had been my regular babysitter when I was 8 and she was 12. 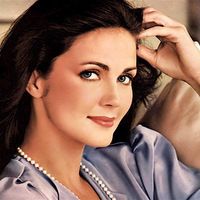 Unless my memory is playing tricks on me, this is precisely what
Danielle Martin looked like when she asked me to dance.
I remembered her well, as she had occupied a starring role in my dreams lo those (many) six years.  I’d had my suspicions when I was 8 that Danielle may have had what scientists termed as “the hots” for me. After all, when the other kids were sent to bed, I was allowed to stay up and watch TV with her until we heard my parents pull into the driveway. At 8 years old, that spelled out love to me! But our forbidden love had to be kept a secret.
But not anymore!  Now I was 14 and she was a bombshell of an 18 year old, and we were on a dance floor! The scene was set, and all that we needed was the perfect soundtrack to celebrate the moment. So you’re probably thinking what I’m thinking. Yep. Cue the Hall & Oates.
The night continued down this magnificent path, enchanting moment after enchanting moment. I got jiggy wit it, I socialized with the “older” crowd, I delighted in the array of refreshments. It could not have been better.
And that’s when I saw her.
She was beautiful; this nameless lady in a red dress, with dark hair and blue eyes. Of course I can only assume you’re thinking the same thing I’m thinking. Yep. Romance was in the air. Cue the Wham!
She was standing in the midst of several other attractive and significantly older women. 18 year olds. Well, thanks to a sensational experience earlier with Danielle Martin, plus an evening of flawless socializing…I was really overloaded with a false sense of confidence. I could not be shaken. I walked boldly up to Red Dress, completely convinced we would one day tell our grandchildren about this night.
“Wanna dance?” my voice warbled, surprising even myself.
It was the last song of the evening, and heaven bless her, she actually nodded her head. Wow. Really, the only thing that would have made the moment even better would have been if she’d instead just said, “Not a chance.”
See, it quickly became evident that she hadn’t done either of us any favors by agreeing to dance with me. She clearly didn’t want to be there, and I clearly wanted her to be there so badly that my palms were sweating as if this dance were being judged by Church leaders themselves and my life hung in the balance.
Who was I to think an attractive 18 year old woman was desperately waiting for a junior high kid to come make her evening by pulling her away from her ostentatious friends and out onto the dance floor in front of a condemnatory crowd to enjoy what had to have been the single longest love song ever recorded in the history of ever?
Not a word. Not a single word spoken between us. I blamed myself, of course. But I blamed her, too. Sure, I obviously put her in the difficult situation of not wanting to crush the spirit of an overly-zealous pubescent boy while also not wanting to dance with him…but once we found ourselves in this horrific predicament, she did absolutely nothing to save me. She didn’t compliment me on my “Deacon Two-Step” (the quintessential dance move of all stake dance first-timers), she didn’t ask if that was Drakkar Noir or Old Spice that I was wearing (it was both, I wanted to smell really special), and she didn’t ask me what I thought of the intricate subtleties and underlying meanings behind Wham!’s “Careless Whisper,” which was underscoring our unending dance. Nothing. Just complete, painful silence.
It felt like days had passed.
Finally the song ended, our hands dropped to our side, and we both did an about-face and marched away from each other, equally embarrassed and ashamed.
And that’s life in a nutshell, my friends. Ups and downs. Peaks and valleys. Unstoppable, then humbled. Cloud Nine, then Cell Block Nine. But what a journey. And what a soundtrack! You’re probably thinking what I’m thinking, right? Yep. Cue the Howard Jones. 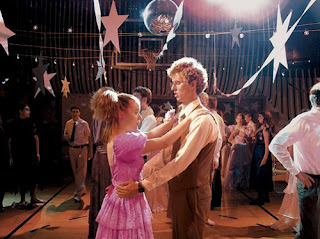 Hilarious, but painfully true !! Would you consider sharing this as a quest post on a blog I run for our stake young women ?

Cue the Wham! Hilarious. I dont even know you- but you. are. funny.

I wanted to smell extra special I'm going to be laughing about that for a few days.

Thinking of Stake Dances still fills me with terror.

LOL I love your reminiscing here. :)

I can't imagine anyone that doesn't know the individuals of which you speak finding this as entertaining as I did. Thanks for the memories. I could go for a Bobs Big Boy shake in the tin cup right about now.

Terry, some day we should meet for lunch in a Bob's Big Boy. That shake will be on me. I've thought about sending the link to at least Sherri and Gillian. I believe I danced with Gillian on that first night as well. Man, this seems like a lifetime ago, doesn't it?

Hilarious ... I am so glad somebody told me to check out your blog! Your description could fit *any* dance ... church or school. Oh the agonies of puberty! Just awesome ...

Oh my gosh! This was awesome! It was like an amazing/ painful stroll down memory lane! Danielle Martin was as sweet as she was beautiful, huh?
I swear, I LIVED for stake dances!!! My favorite one was a New Years Eve one where some older popular guy asked me to take a pic with him in a photo room they had set up. I thought I'd died and gone to heaven! I guarantee he doesn't remember it (I was probably 1 of 30 girls he asked), but it made my year! How is that?!?? LoL!

Okay, fav dance story? Bar none-- hands down-- the one where Vince Wutkee wasn't allowed in because of his hair. It was all spiked up in these big points all over his head. So--- he went to a friend's, did his hair to like EXACTLY like the guy who wouldn't let him in and came back-- WITH A FRIAR TUCK!!! He literally shaved a friar tuck haircut!!!! Come on!!!! How amazing is that?!?!? Best story ever. Go Vince Wutkee!!!! Lolololo!!!!