Flattery Will Get You Everywhere With Me

If you've seen me without my make-up on then you'll agree with me when I say that if they made a movie about my life, I would be played by this guy: 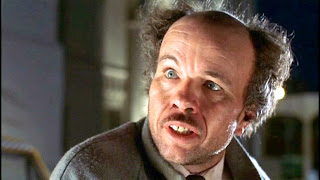 Clint Howard, brother of Academy Award winner Ron Howard. Aside from our looks, we have something else in common: Ron Howard won't return either of our calls.

And if Clint isn’t available, I assume they’d go with this guy.

However, in the past three months I have been told, no less than a dozen times, that I actually look like this guy. 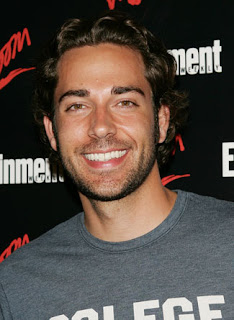 Let me just set the record straight right here and now: This does NOT offend me. In fact, it might be the single most awesome and inaccurate thing anybody has ever said to me.

The comments vary. I get everything from “DUDE – it is uncanny how much you guys look and act alike!” to somebody saying, “You know who you remind me of? Chuck.” And the person next to them saying, “Huh?…Yeah, I can see that.” 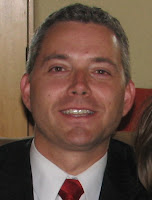 But truthfully, besides the fact that we’re both tall, dark, and male, I don’t see the resemblance. Unless you are basing this comparison on Zachary's character on Chuck, where he is perpetually in over his head and completely under-qualified in what he's doing. In that instance, I do find common ground between us.

But these people persist! And they are not even in the same room together. I have one friend who is so convinced that I am Zachary Levi, she wrote her own blog post about it.

Jump to a completely different circle of people – the teenagers at church! I had a young lady come up and say, “I thought of you during Tangled, because you’re totally like Flynn Ryder.” Voice of Flynn Ryder? Zachary Levi. 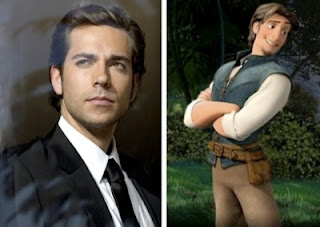 Again, I am honored. And I would like to invite Mr. Levi to consider the role of Ken Craig...should that screenplay ever be written, I mean. And if he's too busy to give it a look-see, well, no worries. I've got one more doppelganger I've already been in contact with. Clyde.

Clyde is the one in the passenger seat.

I haven't been told I look like anyone, but I did find the shorter, fully grown version of Val Kilmer in Top Gun.

The thing about you and Chuck is that not only do you look like each other, but I've seen him DO things where everyone in my living room - including the dog - shouts in chorus, "Oh, man, that was SO Ken Craig!!"

I've been told I look a lot like Clint Howard, too. So you took mine.

p.s. What ward Young Women's group TELLS their Bishop he looks like the dashing romantic lead in an animated film? Just what kind of program you runnin' over there, dude?

Someone once told me I reminded them of Gwyneth Paltrow's character on Iron Man. Very flattering, but ya, I don't see it. You just need more facial hair, then you'll see the resemblance between you and Mr. Levi.

Lots of folks in Paraguay in the early 90's kept telling me I looked just like Kevin Costner. And I still had a full head of thick hair. Although those folks in Paraguay usually really know their American Actors . . .

Ha, Ken you DO look like him. But you may need to dye your hair to achieve a better resemblance. Sorry for that.
I did one of those online tests where you upload a pic of yourself and it finds the actor/actress closet to you. I was hoping for Angelina Jolie or Catherine Zeta Jones. I got Britney Spears. :(

I can totally see it. Could you please learn to "flash" like Chuck does though? It really could come in quite handy.
I get Gary LeVox (the lead singer form Rascal Flatts) and Mr. Incredible. I, unfortunately, do not have either of their skills. I do, however, have both of their receding hairlines.

I have been told, and must agree, that I resemble Teri Polo from Meet the Parents. And I've never watched chuck so I can't say anything for his mannerisms, but you are pretty good looking and HE should feel flattered that people think he looks like YOU. ;)

Well I don't necessarily think you look like him, but I can see how they get it. You have the same nose or smile or I dunno, something there is the same! ;)

People have said Julia Roberts- I think mostly when I had my red hair and because I have a large mouth ;0! The best compliment: Scarlet Johansen (sp) but PAAAALEASE, I do not whatsoever look like her. But hey drunk people, I'll take it! :)

You were fabulous in Tangled. Seriously.

Without makeup Cruella Deville. With makeup and a younger me I got Helen Hunt and Daisy Fuentes.

Well, I can see it. But still think you look a bit like Cary Grant as we previously discussed. I have seen you look like Chaka, aka Clint Howard once though. The day Becca was born. (Only kidding) In my previous body(before full term twins and 3 others) I was told often that I looked like Kate Winslet in Titanic. If I go to bed with my hair wet and no make-up them it's a toss up between Rod Stewart or Gary Busey.

A kid in high school was SURE I was some lady from SNL. I had never watched the show but when I finally did and saw the lady he was talking about was an average-looking (and kind of funny looking) blonde, and not the supermodel-type I was assuming she must be. My self esteem took a major nose dive then.

Just kidding. I always knew I was all crooked and disproportionate and I've seen enough of those documentaries about how the more symmetrical you are the more attractive. And I'm okay with all that.

Oh, and I forgot about the title of this post. You and Zachary Levi both have quite symmetrical faces. :)

Yes, I agree with "Lisaway" I think between eye SHAPE and forehead and a little in the mouth, it could work. I love that every random person tells you that! The thing that I get the most from every random person is not what particular PERSON I look like per se, but that they "know me from somewhere!" and I just laugh inside because apparently everyone "knows" me from somewhere! So I wait while they try and figure it out, and then when they can't, I just assure them that it was Heaven. I must have been "big time" in Heaven ;)

I agree with Kendra--you are a handsome devil, so this Zachary guy should be flattered. :)
In high school, I was told by a bunch of guys in my senior class that I looked like Mia Hamm. HUH?
But these days, I've been told by a number of people that I look like Hillary Swank. Hmm. Not so sure.

I still think you look like Cary Grant. And you already know that I am secretly Charlize Theron.

People tell me I look like Quenten Tarrantino. If that is true, why would anyone think that I would want to hear that?

MANY years ago someone told me I look like Michelle Kwan. Oh, and yeah, you do look like Zachary Levi. For instance, study his and your nose. Almost exact!

Make sure you get that Buscemi thing worked out. I've seen Billy Madison; he does have a "People to kill" list.

When I saw Tangled I thought that Flynn Ryder totally reminded me of the guy in Castle. Have you ever seen that show? Do people ever tell you that you remind them of Castle? I'm just curious. As for my celebrity look-alike...I wish I had one. Well, I take that back, sometime people tell me I remind them of Marie Osmond. But, like you, I want them to tell me I remind them of someone 10 years younger than me (not 10 years older)! Oh well.

I always thought Flynn Ryder reminded me of the guy in the TV show Castle. Do you ever get that one? As for me, I wish I got more celebrity look-alike comments : ) Once in a blue moon I'll hear that I remind someone of Marie Osmond. But what they're really saying is "you have big teeth"