Friends and Loved Ones:
I know this is a broad and impersonal way to do this, but I wanted to let others know… My dad, Kenneth Nelson Craig, unexpectedly passed away last Thursday, April 11. He was 75 years old, and remarkably healthy, so it caught us all off guard. I immediately drove down to be with my mom, and over the weekend, all 8 of us siblings gathered around her.

It has been a gift to be able to be together – to wade through memories, to laugh while crying, to be grateful for our dad’s influence in our lives. I’ve felt incomparable peace and reassurance. I’ve felt the love of my Savior. I have felt my dad near. I just miss him so much already. Tremendously.

Per my dad’s wishes, there will be no funeral services; rather, we’ll hold a family memorial. It was my privilege to write a eulogy for my dad. I had a really difficult time. It reminded me of an experience from twenty-two years ago, when Katie and I took a trip to Israel. This was before digital cameras were a thing, and I was just burning through film, taking picture after picture – photos of all the details. It was getting expensive. One day, as I was snapping pictures in Jerusalem, Katie literally put her hand on the camera and stopped me. She quietly said, "You are not going to capture all the feelings you have about being here – no matter how many photos you take." And that's how I feel trying to write about my dad. I’m not going to capture all the wonder and influence of my dad’s life, no matter how many words I write. I could have kept writing and writing…it would never be enough. If you’re interested in a small glimpse – a high-level view of his life – here it is. I needed somewhere to put it.

The timing of this Easter season has been a blessing. I am immediately comforted at the thought of the Plan, of the Resurrection, of immortality and eternal life – and knowing that my dad is busy in a work that makes him happy, with people who love him. I can feel him aware of me, of us. As President Nelson recently said, about loved ones who pass to the other side: “[He] can minister to you in what I call ‘parenting through the veil.’ [He] can see us more clearly through the veil than we see [him]. We are sealed by eternal ties. [He] loves us now more than ever. [His] desire for our well-being will be even greater than that which we feel for ourselves.”

“Thou shalt live together in love, insomuch that thou shalt weep for the loss of them that die.” – Doctrine and Covenants 42:45.

I’m grateful for the gift of being able to love and feel loved. 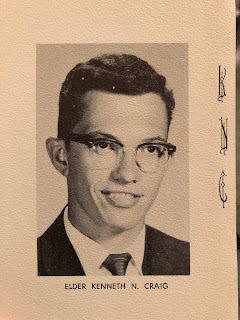 This is the story of the life of Kenneth Nelson Craig. It’s going to be impossible to tell; you should just know that up front. The task of summing up the life of a man of this caliber … I’m not sure how to do it justice.

His favorite roles were loving husband to Dawn and exceptional dad to Ken (Katie), Justin (Trisha), Holli (Jesse) Blankenbiller, Marlise (Jonnie) Smurthwaite, Kendra (Erik) Johnson, Brett (Jessica), Dehn (Catherine), and late-comer Jared (Jan) Heiner. He was also a remarkable grandfather to 47 souls. It would be accurate to say this man was serious about replenishing the earth. It might have been his favorite commandment. (See Genesis 1:28.)

Ken suddenly and unexpectedly passed away on April 11, 2019. No pain, no failing health, no regrets. Just the way he always said he wanted to go. Only about 20 years earlier than he would have planned. The medical examiner concluded the cause of death was hypertensive cardiovascular disease. However, with no signs or history of heart disease or high blood pressure, his family has determined he simply complied with his often-stated philosophy – “when it’s your time, it’s your time.”

Ken was his own brand. He will be remembered for his adventurous spirit – scuba diving, sky diving, flying his Cessna 182, hiking in the Sierras, skiing, eating his weight in homemade strawberry ice cream, never driving the speed limit, and, on road trips, publicly changing his clothes in parking lots. He loved the beach, any advancement in technology, watching movies, sitting around the kitchen table and telling stories with his family, long discussions about the gospel of Jesus Christ, and See’s Candy. (As I write this, I’ve just finished off the one-pound box he had sitting on his desk.)

As a lifelong member of The Church of Jesus Christ of Latter-day Saints, Ken most recently served in the Cedar City Temple. He was previously the bishop of the Tahoe North Ward from 1995 to 2001, a counselor in the Reno North Stake presidency from 2001 to 2010, and a husband and father from 1965 to … well, forever.

He was fiercely loyal to his faith and his family, and constantly aware of his discipleship in following the Savior, Jesus Christ. He had a deep, guiding love for his Father in Heaven, and tried all his days to please Him.

But we’ve skipped over some great details. Let’s go back.

Our hero’s journey began in Rockwood, Tennessee, born to John and Doris Craig. Most of his young life took place in Tucson, Arizona, where he grew up as an only child. He ran track in high school, lifted weights, hunted deer, rabbits, and quail, and served a mission for The Church of Jesus Christ of Latter-day Saints in the New Zealand South Mission from 1962-1964. He loved New Zealand and the wonderful people there. In addition to proselyting work, he was put in charge of mission publications and preparing materials for educating local church leadership. During this seminal time in his life, his love for the gospel as well as his confidence in using his talents and abilities to effectively move the cause of Zion truly took root.

After his mission, he met Rhoda Dawn Tanner at the University of Arizona. He loved to re-tell the story of spontaneously asking her out one night, and she agreed. On their way out the door, some other guy called out to her, “Hey, I thought we were going out?” and she coolly responded, “I got a better deal.” They were married in the Mesa, Arizona Temple of the Church of Jesus Christ of Latter-day Saints in December of 1965. Ken always said that this is when his life began.

Our story takes an unhappy turn when, in 1969, Ken was drafted into the U.S. Army and sent to Vietnam, where he was assigned to the 101st Airborne Division. He served honorably, but his harrowing experiences there were also influential and led to a lifelong intolerance for bureaucracy, abuse of power, authority, and being away from his wife for long periods of time.

Upon his return from Vietnam, Ken and Dawn settled in southern California, where Ken eventually started his own practice as a Certified Public Accountant. He often claimed he had mixed feelings about his career – but was always grateful that he found a way to provide for his family, work on his terms, and enjoy the flexibility in his schedule – regularly taking trips with his family and never putting off plans for “some future date.”

His career choice also allowed him to work from anywhere – which permitted opportunities to live not only in sunny California, but the remote Hawaiian island of Molokai, Lake Tahoe, and a small, rural community in southern Utah. He was known for not only his active lifestyle, but his active mind. He had an unquenchable desire for learning and studying – especially the doctrines of the gospel of Jesus Christ.

Ken was ever conscious of his character and covenants. A student of the scriptures, he found profound joy in sharing what he learned – and whether formally in a classroom, or informally as a friend and parent, he loved teaching and inspiring others to choose a better way.

He lived by faith and had clarity about what mattered most in this life. His loyalty to Dawn and each of his children and grandchildren was unparalleled. He influenced and touched countless lives through church service, friendship, work associations, and his favorite role as husband and father.

Ken will be remembered lovingly for his generosity, his quick sense of humor, his extraordinary intelligence, his prominent spirituality, and his profound testimony of and devout love for his Father in Heaven, and His Son, Jesus Christ. He would frequently say out loud, as if he’d just realized it for the first time, “My life is so rich. I am so incredibly blessed.”

At this difficult time of parting, his family takes great comfort and finds abundant peace in knowing that Ken’s story has no ending, and that each of them continues to have a part in it. 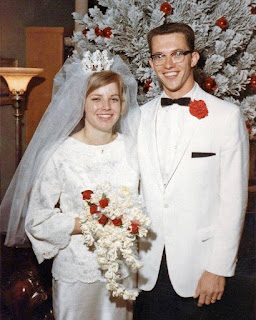 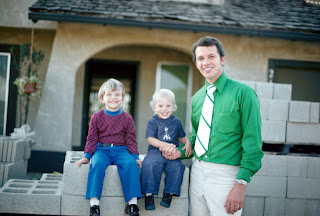 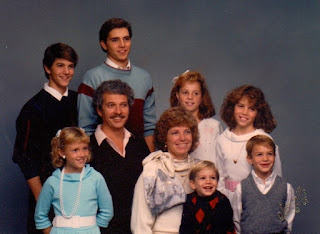 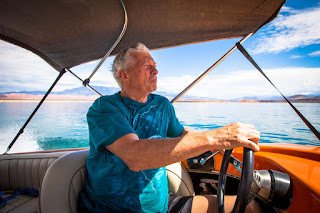 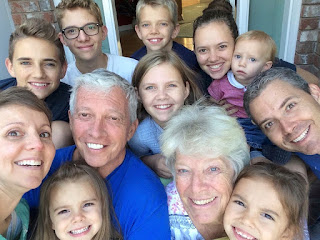 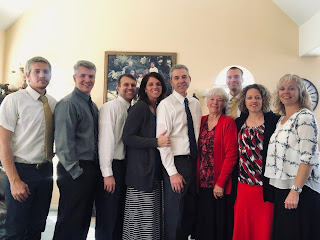 Sunday morning - Palm Sunday - with my siblings and Mom.
Not pictured: Dad. Who I am confident was there.

Beautifully said, Ken. Thank you for your gift in writing memories of your father, your family, and the great love all of you have for our Heavenly Father and his son Jesus Christ. I am so grateful to have watched Ken and your family over just a few of those years. Blessings to you all, always and forever. Easter is a bit brighter this year. With love, John and Phyllis Rogers

Loved your dad. He was an amazing Bishop and always gave great advice. He will be missed. May the Lord watch over your family and bless your family this day and always. Love Jay Taylor

Unknown said...
This comment has been removed by a blog administrator.
7:52 AM

I loved this. I only wish I would have known all this about your dad before he died. What a examplary or is that examplery _-my southern Utah accent gets in the way family you have. Our love to all of you. Bishop Bob and Deanna Groke

Thank you Ken. I cried all the way through this. I truly loved your dad. He imparted great wisdom to me as both my bishop and my good friend. I remember when I first became active after many years away. He asked me to teach seminary. I wondered why he would ask me. I was a single mother running as fast as I could at the time (it so I thought). I accepted as I shed many tears and didn’t see how I could possibly do it. The first year was so hard that I asked to be released. He said okay but then cane to me a few weeks later and said he really needed a teacher. Haha. You know how persuasive your dad could be. So I kept teaching. It was one of the hardest phases of my life but your dad knew and the Lord knew that I had a lot of catching up to do. It truly strengthened my relationship with the Lord and taught me much about the scriptures and the gospel. The refining fires were worth it (in retrospect) and it was your dad’s close relationship with the Lord that caused him to encourage me to go on. Through the years he has just been an email away. I truly miss him. I stopped by to give your mom a hug and a card but no one was there. I left the card on the stairs.
Knowing your dad and your family has been such an enriching experience for me. I can still hear his laugh......Yvonne