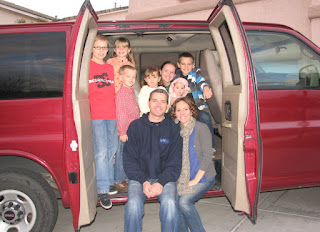 Eleven years ago we bought a GMC Savana 12-seater van. We had Lucy that year, and she was our seventh child. If you haven't noticed, society has drawn a line in the sand and decided that if you have more than six children, you are a freak show and no longer allowed to fit in a minivan. So we were now a mobile circus. We named our van Big Red, and we were completely in love. We even took a photo with it to capture the beginning of a new era for the Craig Family.

Big Red has seen some things, my friends. In the past 11 years, Big Red has made three separate cross-country road trips and has visited 37 of our 50 states. It's been the backdrop for countless family lip sync parties and videos. It has been changing room and moving van. It has served as a “tent” a number of times, when I’ve gone on campouts with church youth groups and preferred the comfort and insulation of Big Red over an actual tent. And a clothesline for the times that the tent and sleeping bags got drenched and needed an elevated place to dry out. And it might surprise you to learn that Big Red had a starring role in the movie “Once I Was a Beehive” – where it transported the young women and their leaders for their annual Girls Camp trip and even towed the Ark. Big Red really nailed that role, I must say.

My favorite thing, though, was whenever we all piled into the van together, and to make sure all children were accounted for, the little drill sergeant in Katie would come out and she’d look over her shoulder and yell, “Count off!” “One!” an enthusiastic Abbie would answer. “Two!” Garren would yell. “Threeee,” Connor would respond, not enjoying submitting to authority. “FOUR!” Roxanna would rally, excited about almost everything at that age. “Five,” Tanner would calmly answer, not wanting to draw too much attention to himself. “Six!” Becca would cheer. “Pffft,” Lucy would offer up – because even though she was very advanced, she was only months old and didn’t know words, you guys. Lower your expectations, please. And then, Katie would turn and face forward again … and about 82% of the time, she’d be crying. It's only gotten more intense as we added Hillary and even in-laws to the count. It’s an emotional thing, to recognize that you have birthed enough people to fill a bus. And it's an emotional thing to have your people all together – this team of wonderful people you love with your whole soul. 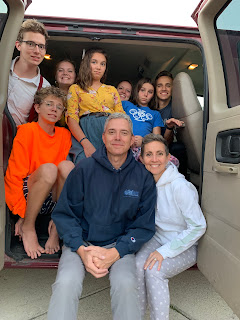 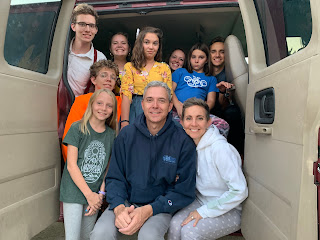 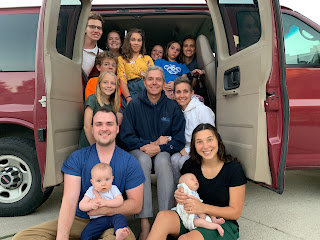 Alas, the time has arrived where Big Red has moved on. Our family is at a different phase of life. Gas prices being what they are, I also find myself swearing every time I have to fill the tank, and that’s probably not a habit I need. Big Red is showing its age, too – the paneling on the inside of the van is falling off and has been comically held together by – I hate to admit this cliché – duct tape. There’s an abundance of dents and dings on the outside of the van as well as those quirks that will never be explained and we have quit trying to remedy. (Back blinker lights, we're talking to you.)

We sold the van this weekend – but before saying goodbye to Big Red, we decided to take a few photos for posterity. Everyone tried to reenact their expressions from 11 years ago. So much has changed in the last 11 years – for our family personally, and the world at large. But one thing remains constant. When we are all together, there’s a really good chance Katie is going to cry. 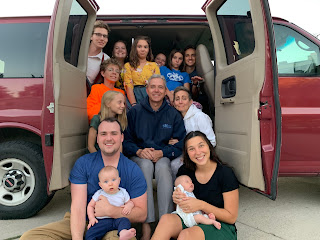 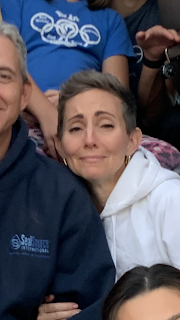 Email ThisBlogThis!Share to TwitterShare to FacebookShare to Pinterest
Labels: Family, GMC Savana, lip syncs, Movies, Once I Was a Beehive, Van