You Have Goat to Be Kidding Me 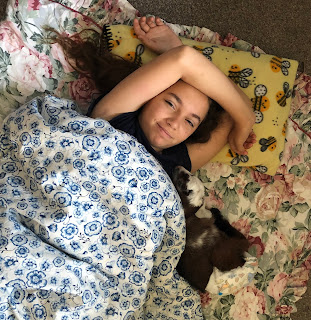 In the part of my brain that makes up alternate realities for my life, there is one where I live on a farm. Not a farm farm, where you actually have to get up at 4:30 a.m. to get under a cow, grab its “things” and squirt milk out into a bucket. Not the kind where you can discern what part of the farm you are standing on based on the particular stench that is permeating the area and the number of flies building cities on piles of manure. And certainly not the kind of farm where I call Katie “Mama.”

I mean the kind of farm where I am magically and effortlessly living off the land, eating the freshest food, and enjoying the stillness of being removed from the hustle and bustle of city life. The Field of Dreams kind of farm, where the wind gently blows the cornfields at sunset and my dad walks out and plays catch with me. Where Katie and I sit on the swing on our front porch and drink lemonade with lemons from our lemon tree and we don’t feel the sweltering Iowa humidity. The farm where we go to the county fair to check out Zuckerman’s famous pig, who is a cartoon and isn’t gross. The farm where my neighbors are Amish and come over to help with a barn-raising.

In short, a farm that doesn’t exist; but I wish it did.

The allure is strong enough that last week, when Katie texted me about taking in a baby goat for a while, I was up for it.

We have some friends – Dave and Rachell – with a farm in Payson, and one of their new baby goats was “failing to thrive.” It was tiny and wasn’t eating or growing quickly enough. The usual remedy for this, according to our farmer-friends, is to give the baby goat extra love and attention and to diligently try to feed it. Our friends were also getting a flock of baby lambs that required a great deal of attention, and on top of that, Dave is an accountant and was incredibly busy at work. They were worried they would not be able to provide the care that this baby goat needed if she was going to have any chance of making it. And that’s when we stepped in.

I’ll be honest: it was the limited commitment that made me willing to roll with the situation. And then … well, if you’d seen this tiny goat, you’d know it was about the most adorable goat you’ve ever seen. We immediately loved Pinky. Sidebar: have you noticed how baby goats – which are objectively cute – get older and turn into hideous creatures known as “adult goats?” It is one of the most tragic metamorphoses to occur on this planet, but it is true. Of course, it’s not limited to goats. Lovely young creatures that turn into appalling old creatures is a marvel that has been well documented and is known in the farming world as “the Disney Channel Phenomenon.” (Hey-o!)

Pinky came to us on a Friday night. We bottle fed her and she ate a little. At bedtime, we laid out some puppy pads and closed her in her little kennel. Initially, we placed her in the living room and our three little girls – Becca (13), Lucy (11), and Hillary (8) – made little beds by her in the living room. We thought if she could see them, she would be comforted. Maybe she was … a little bit … but the unrelenting bleating that literally sounds like a baby crying “Mom” for hours and hours convinced us she was not that comforted. We eventually placed her kennel in another room, further away, and had the girls go to bed. She finally fell asleep. Then we finally all fell asleep.

On Saturday morning, she seemed a bit out of it. (You know, compared to all the other goats we were nurturing.) She ate only a little and was content to spend the day being held. And between our three younger girls, plus Tanner (16), Roxanna (18), and even Connor (20), she was held constantly. Our neighborhood was having an Easter Egg Hunt, and a baby goat seemed the perfect feature, so we brought her out in the front yard with us. Every neighborhood kid and most adults stopped in our yard to see her. Goats are super social animals, and we hoped the steady flow of attention and positive strokes would somehow be beneficial. Like magic.

hat night, we put her back in her kennel and put the kennel in the kids’ room. We thought that being surrounded by the kids who she knew well by now would be enough to console her. We were fools. After a while, we put her back in the same space as the night before – far from the bedrooms – and she finally fell asleep.

Sunday was the best. She was the liveliest she’d been, she ate well, and we were thrilled. We put a diaper on her and let her walk around the house with us. She followed Hillary everywhere. Wherever Hillary went, Pinky was determined to be with her. Like they were instant BFFs. Pinky never showed interest in dressing like Hillary, and they didn’t braid each other’s hair, but they were inseparable. It was really, really sweet. Like a friendship you’d read about in a children’s picture book.

That night, instead of putting Pinky back in the kennel, Becca made a bed on the floor and Pinky snuggled up next to her. She even tucked her head under Becca’s chin at one point. She slept there all night. We all slept better. It had been a good day and we all felt encouraged.

Monday was … not encouraging. Pinky wouldn’t eat much, and that became our greatest concern. Katie and the kids went to visit Rachell on the farm and took Pinky with them. I think there was some hope that she might feel encouraged by the familiarity of the farm. But nothing measurable happened. If anything, she seemed more depleted. And for the first time, we were more concerned than hopeful.

Pinky slept on the floor with Hillary that night. By Tuesday morning, we had to accept the direction Pinky was heading. Katie was regularly texting with Rachell, giving her updates, expressing our concerns, and asking questions. Rachell was encouraging, quick to respond, and reassured us we were doing all the right things. (Regarding Pinky, I mean. We didn’t run the rest of life plans past Rachell to see if she thought they were “right.” I think we already knew what she would say about our bedtime routines, and I know she would not agree that all farms should be odor-free.)

I was working from home and was in the office trying to distract myself with work. When I walked out into the living room, Connor was holding Pinky. He was lying on the floor, and she was lying on a heating pad on his torso. He seemed acutely aware of her, even sympathetic. The three little girls were busy with school, but kept coming into the room, looking at Pinky, letting a wave of acceptance and sadness wash over them, and then going back to their work.

I sat by Connor and watched her. Katie got off the phone with Rachell and came over. “Rachell says if the inside of her mouth is cold, that’s bad.” She stuck her finger in Pinky’s mouth, then looked at me and her eyes watered. We weren’t sure how much longer she had, but we decided we’d tell the girls to come say goodbye.

I’m not a big animal enthusiast. I didn’t grow up loving pets and while I can appreciate other people’s connections to pets or animals in general, it’s never been a part of my own personal life. But I looked at Pinky and my heart hurt. We had volunteered to care for her. I assumed that meant nursing her back to goat-health, and while I knew there was a risk of that not working out that way, I liked thinking it was low risk. I’ve just always struggled to accept possibilities that I don’t like or want, I suppose. And now here I was, running my hand over this tiny living thing at the end of her very short life. Her breath was shallow, her head was laying on Connor, and she was letting out these occasional small cries, trying to communicate … something. I don’t know what. A request that we stay close. A declaration that she was still here. A goodbye. An expression of gratitude.

I looked up at Connor, who had tears coming down his cheeks. “I’ve felt like this before,” he said, looking down at her. Connor has gone through some eras of depression over the last couple of years, and something about this baby goat lacking strength and ability to thrive was relatable to my son. That hurt my heart too.

The girls came into the room and gathered around Pinky. They were bawling, and being the sympathetic crier that I am, this was my final attempt at keeping a composed face as well. We watched her breathing grow more and more shallow until it finally stopped, and her neck sagged – all life having left her little body.

It might be the strangest connection I’ve felt to another life. I like to think that no matter the medical reason behind Pinky’s failure to thrive, she felt cared for and loved and comfortable. She impacted our family for good. She also added another feature to my unrealistic dream farm. It’s a farm where the animals are all happy and thriving … and maybe wear diapers, so when they become BFFs with your kids, they are easy to clean up after.